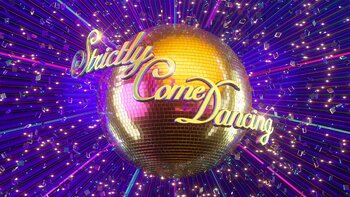 Now (2021) on its 19th series, Strictly Come Dancing is a Celebrity Talent Show in which 15 celebrities are paired up with professional dancers, the latter of whom have to teach the former how to dance. They dance each week and one couple is voted off each week via a combination of judges' scores and public voting until the the final, which is decided by audience vote alone. The final is intended to have 4 couples (3 in earlier series) but sometimes there are less if someone has dropped out.

In early 2000s, the BBC hit on the idea of bringing back the competitive ballroom dancing show Come Dancing, except with celebrities. The show was designed so that dancers would be judged partly by professional judges and partly by a public vote. The show debuted in 2004. Two series aired that year; since then it has always aired in the last months of the year with a final in mid-December.

Originally hosted by Bruce Forsyth and Tess Daly until the 2014 series, Brucie's role has been taken overnote He was originally intended to remain as the host of the Christmas special and any charity editions, but ill health prevented this from happening by previous Sunday show host Claudia Winkleman, the first both-female presenting duo in a British Saturday evening show.note In the second series Tess was replaced by first series champion Natasha Kaplinsky for the first half due to pregnancy, and in November 2014 Claudia was replaced with Zoe Ball, host of companion show It Takes Two, for three weeks for family reasons.

Each dance is marked out of ten by the four judges, who currently consist of:

Arlene Phillips was a judge until 2009, but was replaced with 2007 champion Alesha Dixon, much to the disgust of news hacks. Dixon jumped ship for Britain's Got Talent after three series, whereupon former Royal Ballet prima ballerina Darcey Bussell (previously a guest judge for the final stages of the 2009 series) took over. Len Goodman, one of the original four judges, departed after the 2016 series, with his role of head judge being taken over by Shirley Ballas. Bussell departed after the 2018 series, to be replaced by Motsi Mabuse.

Film and TV choreographer Bruno Tonioli (generally quite generous, flamboyant and Camp Gay) was a judge from the very first series, but was not present from the 2020 series due to the COVID-19 pandemic, as he also judges on the US version, Dancing with the Stars, and travel restrictions made it impossible for him to do both. In 2020 they just made do with three judges, but when it became apparent that he would also be unable to participate in the 2021 series he was replaced with long-serving professional Anton du Beke; what happens once the pandemic is over remains to be seen.

Some recurring types of contestant appear:

May overlap with any other categories.

The show also has an attributed "curse of Strictly", with a string of widely-publicised breakups between celebrities and their established partners, sometimes in favour of the pro they were paired with for the show.

Dancing with the Stars is the Transatlantic Equivalent (which is a Market-Based Title because the original long-running Come Dancing series isn't well known outside the UK) There are several other versions, which can go in their own entries.