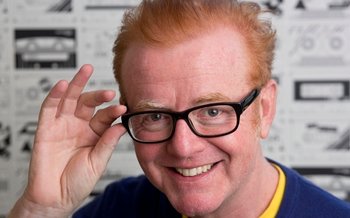 You were expecting someone else?
Christopher James Evans (born April 1, 1966) is an English TV and radio presenter who until late 2018 presented the BBC Radio Two morning breakfast show, a slot inherited from Terry Wogan and Sarah Kennedy. He also was a host of The One Show until he was chosen as the new host of Top Gear.
Advertisement:

Prior to taking over the radio show, Evans presented TV shows, most notably Don't Forget Your Toothbrush (gameshow) and TFI Friday. He is most famous for re-inventing morning breakfast TV, revolutionising the genre with the zoo-format The Big Breakfast on Channel Four. (since widely imitated worldwide).

His previous stint at the BBC, on Radio One, was marred by allegations of bullying staff and ended in his being sacked for refusing to work on Fridays because it clashed with his TV show for a rival channel. However, all appeared to have been forgiven and forgotten, and Evans became very popular in the morning radio shownote Now presented by Zoe Ball, gathering consistently high ratings and a loyal fan-base.

Evans was also notable as one of the two main co-presenters of the BBC flagship series Top Gear after its revamp following the indiscreetly public retirement of its old presenter, Jeremy Clarkson. Following a ratings slump and allegations of misconduct, including renewed allegations of bullying and harrassing staff and co-presenters, Evans has now resigned from this show after only one series. His Channel Four show TFI Friday has also been axed.

He was formerly married to singer-turned-actress Billie Piper, now famous for her work on Doctor Who.

In September 2018, it was announced that Evans will be leaving the BBC's morning radio show to return to Virgin Radio. His successor is long-time BBC presenter Zoe Ball.

He is not to be confused with the American actor Chris Evans.

This radio presenter's career and work contains examples of: