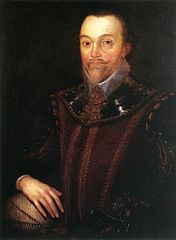 Born a preacher's son in a small town in western Devon, Francis Drake would go on to bigger things. Over the course of his short life, he would become a sailor, a commander, and one of the most successful pirates of all time. One of the "Sea Dogs," Privateers commissioned by Elizabeth I to harass Spanish treasure fleets, Drake would become a national hero to England, and a hated boogeyman to Spain.

Under Elizabeth, England experienced a period of political stability and cultural growth, where it began to come into its own as a nation and a potential player on the world stage. England being a Protestant nation, this development did not sit well with Spain, the Catholic superpower of the day. That, plus Elizabeth’s clear intent to rule in her own right rather than honor the Spanish King Phillip II's (actually somewhat legit) claim to the English throne, meant that Spain and England were very soon butting heads. Unfortunately for England, in the 16th Century, Spain had naval supremacy. The grand and glorious Royal Navy of future centuries was barely a gleam in anyone’s eye. So, England did what she could with what she had. And what she had was a Rag Tag Band Of Misfits known as the Sea Dogs, who would plunder and pillage and engage in acts of dubious morality in the name of Queen and Country (and Spanish gold). And Francis Drake was the most famous.

Drake's maritime career began at a young age, serving as an apprentice to a small Chatham merchant and discovering an aptitude for navigation. At 23, he was given his first command, in the merchant fleet of his cousin (and fellow future Sea Dog) John Hawkins. His career was largely unremarkable until 1568, when he and Hawkins were captured by the Spanish authorities for illegal slave trading. Their ships taken and their crew killed, Drake and Hawkins barely made it back to England alive.

This made it personal for Drake. He obtained a Letter of Marque from the English Crown sometime between 1570 and 1571, and in 1572 his pirate career began in earnest with a raid on Panama. After a year of raiding the Spanish Main, Drake returned to England with a massive treasure haul and an equally-massive reputation as a brilliant and ruthless Privateer.

In 1577, Drake set out to become only the second person known to successfully circumnavigate the globe. Given a top-secret assignment by the Queen herself, Drake put his famed navigational skills to the test, to sail around the Americas and into the Pacific, to assess the boundaries of the Spanish Empire, and to hit them right where they lived. And he did his job disturbingly well: by striking targets on the Pacific coasts of Peru and Mexico – places the Spanish thought were simply too far away to be targets for English Privateers – Drake ascended to the very top of Spain's shitlist, becoming the most hated and feared pirate of his day. Somewhere on North America's Pacific Coast (people are still debating exactly where), he stopped for a resupply, then planted a flag and claimed the land for England, declaring it Nova Albion – New England.

Drake received a hero’s welcome upon his return to England in 1580. The stories of his exploits and the significant riches he brought back with him to share with the Crown managed to boost his reputation even more, and later that year he was knighted for his service. Soon after that, he (partly) retired from the Privateering business, buying an estate and going into politics, even getting himself elected to Parliament three times.

Of course, fate had other plans for Francis Drake. In 1585, the long-simmering tension between England and Spain finally boiled over, and the so-called "Anglo-Spanish War"note Not a traditional war, but rather a long period of hostility punctuated by the occasional dust-up at sea. broke out. And this time, Philip was determined to crush this upstart Queen and her pathetic little island once and for all. He commissioned the building of the Spanish Armada, the largest invasion fleet ever yet assembled. Drake was named Vice Admiral of the English forces, and immediately started running pre-emptive strikes on Spanish ports, designed to delay the construction of the Armada and disrupt supply lines. His most famous strike was the raid on Cadiz, where he managed to destroy or disable almost thirty vessels, setting back the invasion preparations significantly.

By the time the Armada was ready to sail in 1588, Drake and his fellow Vice Admiral Lord Charles Howard had bought enough time to adequately prepare for the invasion. With the help of some fortuitous weather and some outside-the-box strategies, Drake and Howard handed the Armada a crushing defeat. Unfortunately, a botched counter-initiative failed to net a decisive victory for England, and the Anglo-Spanish War dragged on for another sixteen years.

Drake himself would not live to see the end of the War. While raiding in the Caribbean he contracted dysentery, and died in 1596 at the age of 55. He was buried at sea, in full armor, in a lead casket, off the coast of Panama.

Sir Francis Drake towers over many in the public imagination. He is perhaps the Ur-Example of the dashing pirate-adventurer who has been everywhere and done everything. He is the inspiration for the likes of Han Solo and Jack Sparrow. He is the guy who singlehandedly made pirates cool. He has even ascended to King Arthur like status, with the legend of Drake's Drum, a snare drum that he took on his circumnavigation of the world, and he swore that if England was ever in danger and someone beat the drum, he would return. And apparently, the drum has been heard to beat itself during wars or especially significant events...

Of course, it's not all good things. Like all national heroes, Drake's reputation was conflated with time and distance, with the positives well remembered, and the negatives quietly downplayed. Like all Privateers, Drake was technically a pirate, except that he had a piece of paper from the government authorizing him to do so. Many of the things he did in service to the Crown would probably get him classified as a terrorist by today's standards: one of those "outside-the-box" strategies he used against the Armada was to employ fireships, considered at the time to be a very dirty tactic, on par with landmines and Deadly Gas. Like all pirates, his raids on Spanish port cities resulted in indiscriminate killing of soldiers and civilians alike. And lest we forget, his first command was a slave ship. And not even a "legitimate" slave ship, but an illegal venture of his cousin's, capturing free Africans and selling them on the black market, in an attempt to bypass the legal channels over which Spain held a monopoly.

That being said, Drake’s achievements were nothing to sneeze at. Being only the second commander to sail around the world (and he lived to tell about it; even Magellan couldn't say that) was an unparalleled accomplishment. And it cannot be argued that he possessed a keen strategic mind and no small reserve of courage, without which England could not have endured against Spain as long as it did. And of course, it was that bravery and sense of adventure which inspired whole generations of English sailors to follow his example, to go forth, explore, colonize, and lay the foundations of what would be one of the world's greatest empires.