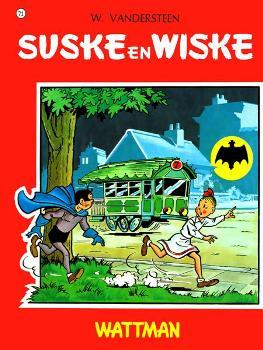 As one of the most famous superheroes of all time, Batman seems to be the most frequent target for direct parody, more than any other character, including Superman. This may have something to do with the 1960s TV series Batman (1966), which widely increased his pop culture notability outside the USA, as well as the high profile blockbuster movies from 1989 on. Thus more people on Earth, even those who aren't fans of superhero comics, will be familiar with aspects of the Batman universe than any other superhero franchise.

Typical elements for this Stock Parody will be the bat ears, the bat mask, the bat symbol shining across the street, the bat mobile (which has its own page To the Batnoun!), the Batman Cut (which is on its way of getting its own page), a younger Sidekick much like Robin, a trustworthy butler who helps the superhero out, wacky villains built around one defining characteristic (The Joker, The Riddler, etc.), onomatopoeic words flashing to the screen during fight sequences, the phrase I'm Batman! said with a husky voice, and, in some versions, a comically excessive Dark and Troubled Past and over-the-top angst Played for Laughs.

Often the superhero in question will have a Punny Name based on Batman, like "Fatman", "Bartman", "Catman", ... As an extra joke his theme song will be a direct parody of the Batman theme song from the 1960s TV show.

For the non-parodical examples of the archetype Batman codified, see The Cowl.