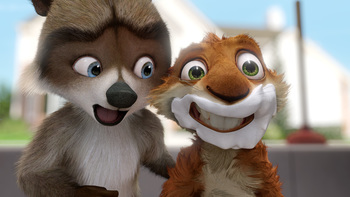 Beware of the crazy rabid squirrel.
Uh oh, Fido's gotten into the whipped cream! Or the shaving cream, or the soap suds, or the toothpaste — the point is, white foam is dripping from his mouth. Cue people running away and screaming, "Mad dog! Mad dog!"
Advertisement:

Sometimes it's a human being rather than a dog inspiring the panic.

See also You Don't Want to Catch This.