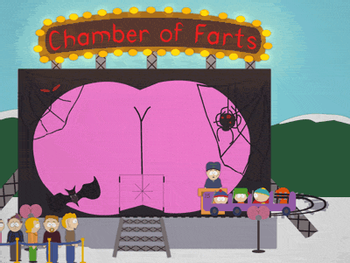 The average Crappy Carnival's main attraction.
Timmy: Are we at the circus?
Cosmo: Of course not! Circuses have probate child labor laws! We're at a carnival, which is like a circus, but far more dangerous! They barely have to obey the laws of physics!
— The Fairly OddParents
Advertisement:

What's more fun than a carnival? It's got rides and games, frequently travels (though some don't, such as those of Coney Island), and is known for sideshows containing smaller acts than a circus (freaks, contortionists, and cabinets of curiosities). However, in some fiction they're cheap, bad ripoffs. The rides break, the games are rigged against you, and the magic acts are dishonest. The workers are creepy "carnies", too. These aren't places to have fun, they're only there to rip you off, not provide decent entertainment.

If the carnival is just a civic event and not a traveling show, expect it to be even crappier. Stalls serving unhealthy and/or disgusting food; bazaar tents selling cheap, ugly (often homemade) merchandise; either oldies music or some street musicians playing in the background; bored people milling about mindlessly; and few actual amusements other than really lame ones (a face-painting booth, maybe). Only yokel tourists, dateless losers, and the very poor will be caught dead at such an event.

Sadly enough, genuinely fun carnivals are not often seen in fiction anymore except in period pieces. These carnivals, while no more thrilling than their modern counterparts, are a lot more charming, often with Gay Nineties garniture, and wholesome diversion for children, their families, and cute couples on dates. Expect to see people leaving the grounds with cotton candy or gigantic stuffed animals.

Related to Souvenir Land, but distinct in that this isn't asking for you to buy their merchandise. This carnival is too crappy to be a pastiche of Disneyland. Darker versions are Amusement Park of Doom and Circus of Fear. Compare with Suck E. Cheese's, which also boasts disappointment and creepiness in equal amounts.

Mr. Krabs decides to open a playground to attract kids to his restaurant, but because he's cheap, he builds it out of random junk.

Mr. Krabs decides to open a playground to attract kids to his restaurant, but because he's cheap, he builds it out of random junk.