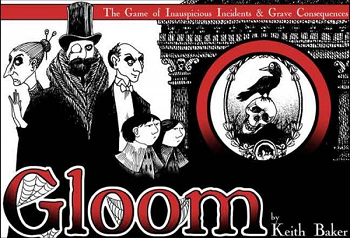 is a darkly comic card game by Keith Baker for two to four players (increased to seven with the expansion packs).

The world of Gloom is a sad and benighted place. The sky is gray, the tea is cold, and a new tragedy lies around every corner. Each player assumes control of the fate of an eccentric, Victorian family of misfits and misanthropes, whose world-weary, thin-lined faces are caricatured from the works of Charles Dickens, Edgar Allan Poe, Bram Stoker, Mary Shelley, and Edward Gorey. Each seeks to magnify the tribulations of the members of their own ailing household and ultimately lead them to the well-deserved respite of an untimely death, while assuaging the sorrows of their deserving opponents. Storytelling is encouraged!

At the end of the game, the family with the most tragic past wins.

Tropes that appear in this game include: