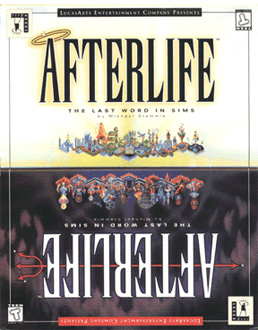 The box opened in the middle so neither side was the correct choice.
The last word in sims!
Advertisement:

Afterlife is a resource management game released in 1996 by LucasArts. In it, you play as a sort of celestial mayor called a "demiurge," with the ability to design a custom afterlife for the dead. It's sort of like Sim City, only the citizens are the souls of the departed and you are punishing them for their sins or rewarding them for their good virtues.

Help can be summoned to you in the form of an angel called Aria, and Jasper, the demon who really wishes he wasn't here right now. It's not all easy, though — multiple random (and weird) events can happen and mess up things badly. Like many life sims, the game doesn't end in the traditional sense, but you can lose the game in multiple ways.

Just remember not to cheat too many times. If you do, the Death Star will come and start destroying everything you've built.

In April 2015, the game was released on GoG, where it can be found here

Not to be confused with the ITV show of the same name, or the 2009 film.