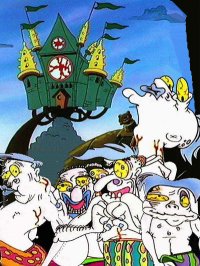 Did you know that animator Danny Antonucci (the same creator of Ed, Edd n Eddy and Lupo the Butcher) made a show for MTV? If not, here's the background of it.

During The Renaissance Age of Animation, animation was enjoying new life as being entertainment for kids (with shows like Animaniacs and Tiny Toon Adventures) and teens/adults (The Simpsons and The Ren & Stimpy Show, as well as Cartoon Network airing classic theatrical cartoon shorts and 30-minute animated shows from the Golden Age of television). However, MTV's Beavis and Butt-Head was coming under fire for being a bad influence on children after a mom who lived in a trailer accused the show of driving her son to burn down their home and another kid got in trouble for crushing an infant with a bowling ball he dropped off a bridge. MTV decided to temporarily cancel Beavis and Butt-Head to make necessary changes to the content. While that was happening, MTV went scrambling for a replacement show. This was that show, much to the horror and embarrassment of MTV and its fans.

The Brothers Grunt (1994-1995) was about the leader of the grunts, Perry, who had escaped. His five brothers (Frank, Dean, Bing, Sammy and Tony) have to find him or else the brotherhood of the grunts will fall. It's a Cult Classic to fans of Danny Antonucci. After this show ended, Danny would later be famous for Cartoon Network's Ed, Edd n Eddy. As of 2016, the show has not appeared on VHS or DVD. However, there is a fan movement

to help support the idea of releasing the show onto DVD.

No relation to the obscure Nickelodeon cartoon The Brothers Flub.

The Brothers Grunt provides these tropes: