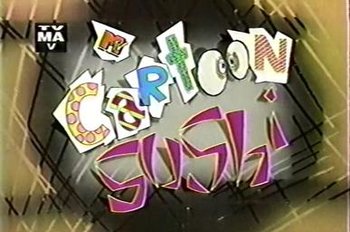 Cartoon Sushi was a half-hour animated anthology that aired on MTV from 1997 to 1998. It was a spiritual successor to Liquid Television. Most of the shorts were domestically-produced in the U.S., though a few were imported from other countries like Sweden ("Robin") or the U.K. ("Pariah the Red Man"). Anime from Japan was also prominently featured in the series, albeit in Gag Dub form.

Tropes featured in the various shorts: