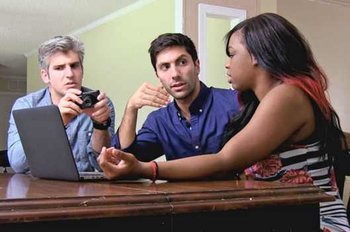 Nev and Max note Max is the one with the camera and grey-ish hair at work helping their hopeful to see if her online beau is legit
Advertisement:

Catfish is an MTV reality TV series which explores the downsides and lies of online dating. The show is hosted by Nev Schulman and Max Joseph, and they travel across the US with their hopeful of the week to see whether or not the other participant in the online relationship is real or if they are, in fact, a "catfish". We've seen couples who have been talking for a few months and some for years.

The show is based on Nev's experience on being Catfished, which he made into a movie before the show premiered in 2012.

This is how a typical Catfish episode goes:

Catfish has gotten popular over the years and is even an integral part of pop culture. A Brazilian version of the show has been created, and the term 'catfishing' has been added to the Webster's dictionary.

Midway through Season 7, Max left the show to focus on his filmmaking career. Nev soldiered on with a rotating series of co-hosts, which included singer Elle King, model Slick Woods, Tallulah Willis (daughter of Bruce Willis and Demi Moore), Justin Combs (son of Sean Combs), and Miss Teen USA 2010 Kamie Crawford, before Crawford was selected to be the show’s new permanent co-host in 2020.