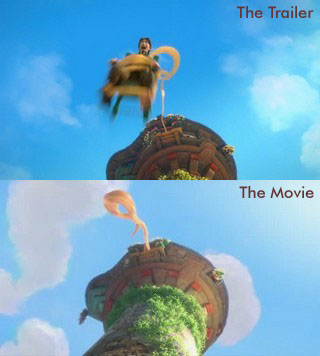 Sauron: Wait, will any of this actually be in the movie?
Wayne: No, it'll all be lost during post-production.
— The One Ring to Rule Them All 3 teaser trailer

Never Trust a Trailer taken to the logical extreme: some trailers are so untrustworthy they include scenes that have been cut from the film itself. Or even worse, filmed just for the trailer.

Most trailers are put together by companies that have no idea what is or is not going to get cut from the film, but this doesn't really help the poor bastard that only came to see the scene that didn't make it in.

This may, however, be justified by the fact that the movie is still being edited as the trailers are released. Since the editing process may take months and sometimes only finish mere weeks before the theatrical release, it is rather common for the trailer scenes to either become a Deleted Scene or be replaced by an alternate take in the final cut.

This trope is also common in teaser trailers that are released long in advance of a film's release. They often feature special footage or scenes that are never intended to be used in the film, said footage either being made specifically for promotion or re-purposed internal materials from early production tests.

All in all, such scenes can be found in nearly every movie with a sufficient amount of promotional material. Expect them to appear in the Deleted Scenes section of the DVD or to be included in a Recut for a Limited Special Collector's Ultimate Edition. A wealth of these can be found in this Youtube playlist