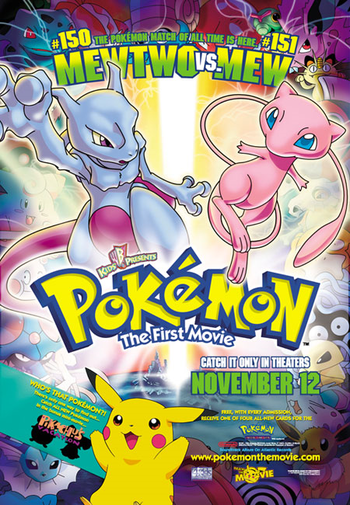 Mewtwo versus Mew. PLACE YOUR BETS!
"Who am I? What is my true reason for being? I will find my own purpose and purge this planet of all who oppose me, human and Pokémon alike. The world will heed my warning. The reign of Mewtwo will soon begin!"
—Mewtwo
Advertisement:

Also known as Mewtwo Strikes Back, the very first movie complementing Pokémon: The Series. It was directed by Kunihiko Yuyama, with the screenplay by Takeshi Shudo. It was released on July 18, 1998.

A team of scientists create Mewtwo, a superior clone of legendary Pokémon Mew. Angry at having been created to serve and be used by humans, it decides it's Gotta Kill 'em All.

It's noteworthy that this Pokémon movie is one of the few that is alluded to in the actual series,note Aside from minor exceptions like the Pokémon 2000 reference in the Whirl Islands Lugia arc, Drew's hometown being the main setting of Pokémon: Destiny Deoxys and having its plot mentioned in a 2-part episode, Ash's Aura from Pokémon: Lucario and the Mystery of Mew, which comes up a few times in DP and when Ash gets Riolu in Journeys, or Dawn possessing the Cresselia Feather that she got in Pokémon: The Rise of Darkrai during the Darkrai arc. having plot elements set up throughout the first season of the show. It was followed a couple years later with the OVA Pokémon: Mewtwo Returns that continues the plotline and themes.

The film came packaged with a short called Pikachu's Vacation, which featured the Pokémon enjoying themselves in a holiday resort with little presence of any human characters, with Ash, Misty and Brock only making faceless cameos at the beginning and end, and Meowth and the Pokédex narrator being the only prominent characters with lines.

Prior to the film's release, there were a series of radio dramas in Japan known as Pokémon: The Birth of Mewtwo. The drama was never released outside of Japan, however most of it was later animated for The Birth of Mewtwo introduction that airs before the film in home releases.

A CG remake titled Mewtwo Strikes Back—Evolution was released in July 2019 in Japanese theaters and February 2020 internationally on Netflix.