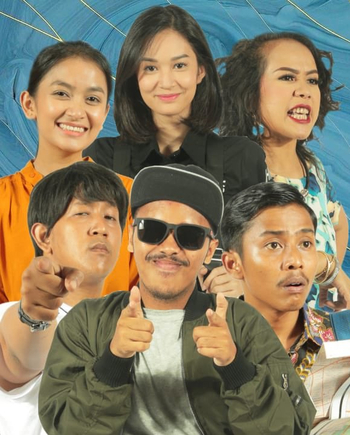 Dream chasers in 2018 Jakarta.note Clockwise from bottom-right: Bambang, Prima, Alan, Pipin, Melani, and Mami Bibir.
"Since a long time ago, Jakarta has always been a magnet for newcomers from the countryside. Anyone who can conquer the capital is considered to be a winner in life."
— Prima, Opening Monologue from the first episode
Advertisement:

Mimpi Metropolitan (lit. Metropolitan Dreams) is an Indonesian Dramedy/Roommate Com aired on NET with Limelight Pictures as the production house. It ran in 2018 for 65 episodes. The show is set in a dormitory in Indonesia's capital city of Jakarta, focusing on three friends that live there, each of them having a dream to achieve in Jakarta.

The first one, Bambang Soedarmo (Madkucil), is a high-school graduate from a village in Wonosari who has just come to Jakarta. His first friend and roommate is a pirated-DVD seller, Penggalan Reformasi (Rifat Sungkar), who is better known as Alan. Their other best friend is Prima Irama (Sakurta H. Ginting), a soap opera extra who dreams of becoming a famous actor. Their dorm is owned by Mami Bibir (TJ Ruth), who also happens to be the owner of the agency where Prima works. The show also features Melani (Faradilla Yoshi), a television creative and Bambang's love interest, and Pipin (Rurin Nirmala), another newcomer and Alan's love interest.

The show's episodes revolve around Bambang, Alan, and Prima's struggles in whatever their current jobs are, their friendship, and their romantic storylines with their respective love interest (or working relationship with his boss in Prima's case).

"If you hang your dream as high as the sky, if you can't reach it, you will fall among the stars."

Mami Bibir doesn't take it well, though the others do.

Mami Bibir doesn't take it well, though the others do.