I Was Having Such a Nice Dream 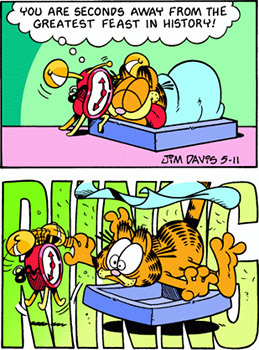 A character finds themselves in an important prophetic dream, receiving vital information from a dead relative in a near-death experience, or just having a terribly good time in their head, when they hear the phone ringing or someone shouting their name and they are defibrillated back to the land of the living, just before the really good bit.

Can result in Ring-Ring-CRUNCH! if the alarm clock is the offender. Contrast Irritation Nightmare for when it's the dream that annoys the dreamer.

Alternative Title(s): Five More Minutes, I Was Having Such An Important Dream