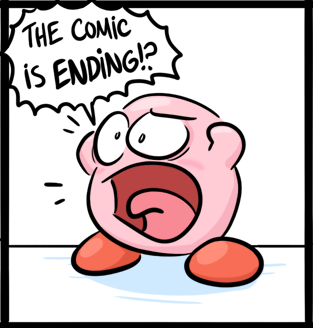 King Dedede broke the news to him.
"He's here to save the nation,
So stay tuned to this station,
If not, we'll be unemployed,
Freakazoid! Freakazoid!"
— Freakazoid! (opening theme)
Advertisement:

A specific type of Medium Awareness, where the impending end of the series is referenced within the show itself. Such events generally happen on the Grand Finale or Finale Season, and at the bare minimum imply it's the End of an Era. Depending on the series, this may be done in the form of events in the final batch of episodes having a double meaning that alludes to an ending of some kind or characters directly Breaking the Fourth Wall.

Because this can sometimes imply a vocal dissatisfaction with the conditions (lack of viewers, Executive Meddling, Screwed by the Network) that could bring about an early end to a show, this may tie in with Biting-the-Hand Humor, and is generally used in media that lend themselves to it, such as Live-Action TV or Western Animation.

The opposite sort of lampshade to And the Adventure Continues. Contrast The Resolution Will Not Be Identified, where an intentionally written finale is not acknowledged as such in universe or on its network.

As this is an Ending Trope, unmarked spoilers abound. Beware!

The Bobobo anime ends with the heroes running towards the new emperor of the Chrome Dome Empire, only to be shocked that the show ends before the fight even starts.

The Bobobo anime ends with the heroes running towards the new emperor of the Chrome Dome Empire, only to be shocked that the show ends before the fight even starts.