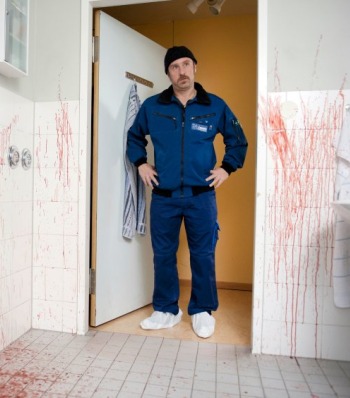 Der Tatortreiniger, or "The Crime Scene Cleaner" in English, is a German Black Comedy series, focusing on the work and 'adventures' of the slacky, but vain crime scene cleaning professional Heiko 'Schotty' Schotte (played by Bjarne Mädel), and how he cleans out the scenes of usually very violent deaths (after the police and forensics have packed up and left), and always happens to stumble across the strangest of people there, including the victim's relatives, employers, acquaintances, hookers, the murderers, and occasionally even the victims themselves.

Much of the plot derives from the usually causal, mundane or non-topical dialogue between Schotty and any of the other characters, which may more often than not not even relate to the death at hand or his work as a cleaner. And it's hilarious.

The episode format is usually always give or take 25 minutes, and the cast is usually limited to one or two other characters, not counting one or two extras, much in the spirit of a short chamber play.