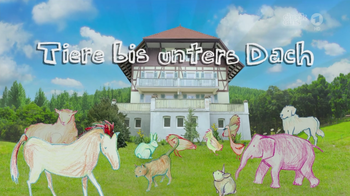 Tiere bis unters Dach (Animals Up To The Rafters) is a German public television series that started in 2010.

Greta Hansen, animal lover and daughter of a veternarian, initially has misgivings when her family moves from the big city of Hamburg to the fictional village of Waldau in the Black Forest. However, she quickly settles in and makes a name for herself rescuing local animals in need.

The show takes an Animal of the Week format, with each episode centering around either an animal in need that Greta decides to save, or a dangerous animal that causes trouble. In season 3, Greta's newly introduced cousin Nellie becomes the new main character. Starting in season 4, there's a bigger focus on multi-episode plot arcs, and the animals often take a backseat to the human driven conflicts.