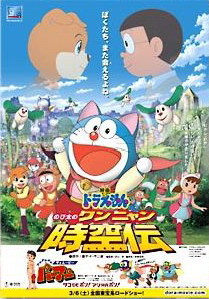 Doraemon: Nobita In The Wan-Nyan Space Time Odyssey is the 25th film installment in the Doraemon franchise, as well as the last one to feature the original voice cast. The film was released in Japan on March 7, 2004.

One day, during the usual softball shenanigans, Nobita saves a stray dog from drowning. He named the dog Ichi and started taking care of him, as well as taking in several other stray dogs and cats. When it proves to be too much to take care in his home, Nobita uses Doraemon’s spare pocket and the time machine to send back the cats and dogs to the Earth in 300 million years ago, and utilizes the Ray Of Evolution to make them evolve. When the gang pays a visit to Ichi and the others’ home later, the time tunnel goes haywire, and ends up sending them to 1000 years after their original time destination, where they discover a city with sentient cats and dogs in it. Things are a lot more complicated than it seems…