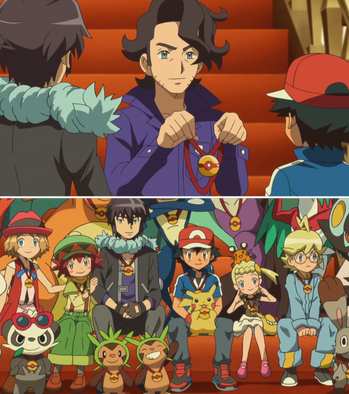 "I'll want an earldom and CHOAM directorship for Gurney Halleck, and him in the fief of Caladan. There will be titles and attendant power for every surviving Atreides man, not excepting the lowliest trooper."
— Paul Atreides, Dune
Advertisement:

An event that usually takes place at the Dénouement of a story. Our heroes are rewarded by some authority figure (the King is a favorite); the rewards may include medals, titles, clothes, the Princess' hand in marriage and half the kingdom, etc. Expect all the main characters to be lined up to receive their praise one after another.

Often, the characters receive the very thing (or a representation thereof) they've been trying to acquire throughout the story. Alternatively, it's just a scene that lets us see the heroes receiving just adulation from the people they've spent no small effort saving. In extreme cases, praise may give way to outright genuflection by the assembled masses.

Expect some awkwardness in the pinning of actual medals, especially if one receiver is highly unusual (particularly a non-human) or the giver is impaired in some way (blind, decrepit, etc.). Another common element is for the award-giver to be opposed to the heroes, such as an Obstructive Bureaucrat, and must now show them honour in public as part of a Humiliation Conga. They may try to sabotage the proceedings in secret.

May also involve an Awesome Moment of Crowning, on the part of either the giver or receivers or at least be the result of Expose the Villain, Get His Job. Contrast Dude, Where's My Respect?.