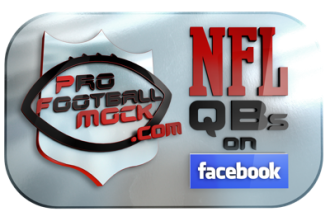 Aaron Rodgers: All right ladies, in light of a certain short-statured quarterback's annoying trolls, I have decided the best way to get back at him is to make a TV Tropes page for our convos and force him to read it.
Philip Rivers: TV Tropes? The wiki dedicated to collecting descriptions and examples of various tropes found in creative works such as television shows, films, and websites?
Jay Cutler: And I thought the reason why Rodgers never left his laptop was because he was watching gay porn.
Advertisement:
Ben Roethlisberger: BECAUSE PEOPLE WHO CREATE TV TROPES PAGES FOR FAN WORKS HAVE NO LIFE, YOU SEE. ALSO, RODGERS IS GAY.
Aaron Rodgers: HOW MANY TIMES DO I HAVE TO SAY IT? I AM NOT GAY!!! I LOVE WOMEN!!!

NFL Quarterbacks on Facebook was a weekly feature on ProFootballMock.com which parodied all 32 NFL quarterbacks in fictional interactions on Facebook after the NFL season and notable events in the NFL offseason.

The NFL QBs on Facebook series started with the Hall of Fame Game, and continued to the Super Bowl, with a Free Agency special and an NFL Draft special, where new quarterbacks were introduced. There were also four special convos during the season, an Opposite Day special, a Halloween special, a special devoted to Product Placement (appropriately called "A Word From Our Sponsors"), and a Christmas Special.

ProFootballMock's sister site, CollegeFootballMock.com launched a Spinoff on August 28th, 2013 called Heisman Hopefuls on Facebook, which uses college football stars instead of NFL quarterbacks, unfortunately the site was shut down on November 23rd, weeks before the Heisman winner could be announced.

The series ended in February 2015, after Super Bowl XLIX concluded the 2014 NFL season. Creator Dave Barry had left the door open to future installments, but a later post revealed that he was ending work on the ProFootballMock site, albeit leaving the site operational as an archive. One year later, a post-Super Bowl 50 convo was posted - appropriately named "For Old Time's Sake."

The series, as well as the rest of the Pro Football Mock Website, has disappeared from the internet, but portions (at least) of the series are available through various archives

Nick Foles: Well that was an interesting article.
Cam Newton: Oooh, ooh! Things Aaron Rodgers says when looking at Playboy?
Aaron Rodgers: For the last time, I'm not gay! Do you have any idea how many women I've had sex with?
Russell Wilson: One less than the amount of wins you have against me?
Aaron Rodgers: WILSON, I WILL TAKE YOUR LOMBARDI TROPHY AND SHOVE IT SO FAR UP YOUR ASS, YOUR MOUTH WILL FLASH SILVER EVERY TIME YOU OPEN IT!