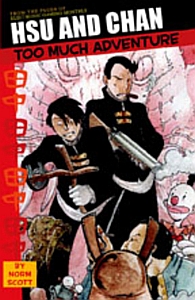 "Hello, video gamers! I'm Hsu Tanaka, that's my brother Chan!"
— Hsu greeting the reader at the beginning of almost every episode
"Brother Chan, you can't sit around counting all the things that could go wrong. The Tanaka way is to barrel ahead, eyes closed. That way, should disaster strike, we can look legitimately surprised for the news cameras."
— Hsu, more or less summing up their business practices
Advertisement:

In October 1999, a two-page comic appeared on the pages of Electronic Gaming Monthly. That comic, by Jeremy 'Norm' Scott, continued to appear in the magazine for nine years, continued on a blog on 1Up.com, and even got eight issues and a compilation published by Slave Labor Graphics with a ninth issue announced. The comic follows the misadventures of the brothers Hsu and Chan Tanaka, two American video game designers of Japanese descent. They created a company called "Tanaka Bros. Game Development" that releases "top quality video games and occasional cheap knockoffs as the situation dictates." Together, the titular brothers have released such mildly enjoyable titles as Roller Death Derby, Fist of the Dark Elf, Lord of the Trousers: a Japanese dating sim, and The Incredible Simulated Box Turtle (he poops!). Their misadventures usually show them trying to market their new game with humorous results, putting up with the antics of their non-human employees, and competing with their rivals at Yamamoto Games, known as the "Most Evil Video Game Company in the world" (though there wasn't a lot of competition for that title at the time). The comics are known for their style of humor and the wordiness of some issues, especially the Slave Labor comics.

Sadly, since there has been no print collection and the author refuses to archive the comics, it is nearly impossible to find a great deal of them outside of buying old issues of the now-defunct Electronic Gaming Monthly. Though it was rumored that the comic would continue in EGM's revival, the magazine has only mentioned the comic once since its revival (though blog posts suggest that the editors and reviewers stay in contact with Norm). Most of the Slave Labor Graphics comics are available in a TPB, however.

After the EGM and 1UP series ended, Norm refocused the series on his website, Spookingtons Media. This included several new comics, a short lived series of newspaper comic style strips and, most recently, an animated series. In 2016, the series went on a long unannounced hiatus. However on December 8th, 2016, Norm launched a Patreon. In less than a day, its first two goals were met, promising a return to the monthly page long strips like the EGM run.

New episodes of Hsu and Chan, older strips, and some of Norm's other works can be found here.

The animated shorts, as well as Norm's other animations, sketches, and "Let's Not Play's" can be found here

Until next time, tropers!