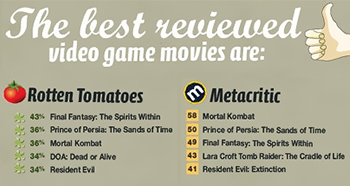 For whatever reason, video games and movies don't play well together. Every so often, someone with dollar signs in their eyes will try to make a movie based on a video game franchise, only to run into this unscalable wall: video game movies suck.

It's kind of hard to say why. Some would say that the plots of some video games are just too simplistic to translate into a movie, existing just to give the player an excuse to go out and fight things. Others would say that video games are essentially movies that have showmanship sacrificed in favor of control, so sacrificing the control may leave you with a bad movie. Maybe directors just invariably pick the wrong game — a game that is exciting but doesn't exactly put effort into Character Development when that character is meant to be the player. Maybe there's too much reliance on the popularity of the game to sell the movie, rather than writing quality.

The reality? Well, it tends to vary. Platform Games tend to be about getting from A to B, and thus many don't require much story within the games themselves outside a few minutes of setup (that may even be hidden within the manual in older games) and a two minute ending, so the writers need to improvise. The average First-Person Shooter may offer an hour or two of narrative cinematics, but even the more cerebral examples of the genre will, by definition, feature enough hours of plot-free gunplay to rival the dumbest Summer Blockbuster. Fighting games tend to have a similarly flimsy plot with Multiple Endings depending on the player's character. Game writers tend to use the excuse of a 'tournament that decides the fate of humanity', and all playable characters need to be sympathetic enough for players to want to play as any one of them, with an ending for each one, but movie writers need to pick just one hero and winner out of a dozen, which is going to tick off fans of the other eleven. Of course, there are video game genres that do consistently pay much attention to the narrative such as JRPGs, but these tend to have far too much plot to squeeze into a two-hour flick without leaving a ton out. While this isn't by itself an insurmountable problem (it's the same issue faced with every adaptation of a novel, after all), it is one more thing that can go wrong.

Additionally, there is the problem of translating a story from the interactive medium of video games into the non-interactive medium of film. In video games, a story is told through the player's own choices and interactions with the game. By nature, films do not tell stories in this way, which causes great confusion for screenwriters who are tasked with somehow translating seemingly "plotless gameplay" into a linear narrative. Not that this is impossible, as some even praised

Edge of Tomorrow for successfully translating video game features such as Respawn Point and Trial-and-Error Gameplay into a film narrative (the author of source material All You Need is Kill admitted he wrote it inspired by his gaming experiences), and Jumanji: Welcome to the Jungle was also lauded

for downright creating a video game world, complete with NPCs which repeat the same lines and elements such as finite lives. Survival Horror has also made a decent transition to the medium of film thanks to efforts such as the long-running Resident Evil Film Series or Silent Hill (since the concepts of the genre are rooted firmly in the horror arena many of the same tropes are present in their source material so moving across to a movie makes sense from a cinematic point of view), though it is also possible to drop the ball here too (see House of the Dead).

On the other side of the adaptation equation, blame can also be pinned on the studios and directors who put out these films. The generation that grew up and has grown up playing video games has yet to produce a whole lot of filmmakers. As a result, the vast majority of people in the film industry aren't really all that familiar with video games, including the ones they are tasked with putting on film; some of the older film industry fellows even have an outright disdain for the younger medium.

Thus, filmmakers don't really know how to adapt the games effectively; even if they choose a good game with a good plot that's not too hard to adapt, they probably aren't going to understand just what makes the game so appealing to people anyway. One cannot distill the core taste if one does not know what the taste actually is. Indeed, this medium ignorance, aside from resulting in bad game adaptations, is also the direct cause of Pac-Man Fever. It's essentially the cross-media version of a Porting Disaster.

There are also filmmakers and directors that know a popular game series but they barely understand why the series is popular to begin with. Rather than contacting the developers that produced the games to get their advice or even asking the fans themselves for help, the filmmakers decide to just wing it and try to interpret the popularity from their own point of view, which can cause fans who see the final product to groan and face palm as they watch a film that they think was made by someone who has zero knowledge on the subject matter and material. This is usually caused by filmmakers and publishers that just want to cash in on the brand name of a famous series, though not all people do this. Uwe Boll has become notorious as a director thanks to his efforts to adapt video games such as Bloodrayne and Dungeon Siege with his own personal touch that leave many viewers understandably miffed, be they fans of the source material or not. The producers of the failed Kane & Lynch movie (which had Bruce Willis and Jamie Foxx attached but never made it past the production stage) outright admitted they had zero interest in the games and only saw the IP name as a means of getting their own vision of a movie made in the risk-adverse studio system.

The situation is similar to what was the case with most superhero films prior to Spider-Man: poor understanding of the comics led to poor adaptations, until the people who actually grew up reading the comics got good standing in the movie business and helped drive the subsequent train of popular and critically acclaimed superhero films. As video games grow more mature as a medium, adaptations have slowly been getting better, with more recent movies like Pokémon Detective Pikachu and the Sonic the Hedgehog films being considered average at worst.

So far, no one's nominating video game movies for Oscars. If you hear new, exciting rumors about an upcoming film (like the once-rumored John Woo-directed Metroid movie), tread carefully, or you may be crushed beneath the Descending Ceiling of bad writing.

Often (although less universally) the inverse is also true, of course, which is The Problem with Licensed Games.

Dating Sim movies (rare as they may be) seem exempt from this for certain reasons (such as less outlandish plots than some other games or a having high immunity to the detriments of Gameplay and Story Segregation), although as with anything, there are exceptions. Although similarly rare, movies based on Adventure Games have been made, and they also consistently avert this trope due to their property of Enjoy the Story, Skip the Game. Notable examples include Phoenix Wright: Ace Attorney and Professor Layton and the Eternal Diva, which were generally well-received.

Animated Adaptations of video games also tend to be received more favorably than their live-action counterparts, perhaps because a medium as focused on zaniness and stylized aesthetics as animation is just better suited to the eccentric stories and settings of some video games. Also, the fact that animated movies are produced with methods similar to those used for video game cutscenes helps, in that they can — at the very least — have the merit of being visually faithful to the source material. Video games are an animated medium, so this makes sense. The Castlevania animated series, for one, is notable for being the first video game adaptation with a "Certified Fresh" rating on Rotten Tomatoes. See Anime of the Game for more examples of such adaptations.

Another possible contributor to the lackluster reception of video-game-based movies is not necessarily that they're bad, as Critical Dissonance demonstrates in a few instances, but that the current generation of movie reviewers and critics didn't grow up with video games (see the Roger Ebert quote above) and thus can't better appreciate said films without experience with their source material, similar to the previous situation with comic book-based films. Or, in some cases, said generation outright developed bias against video games and refuse to see them as good even when there is evidence that they are.