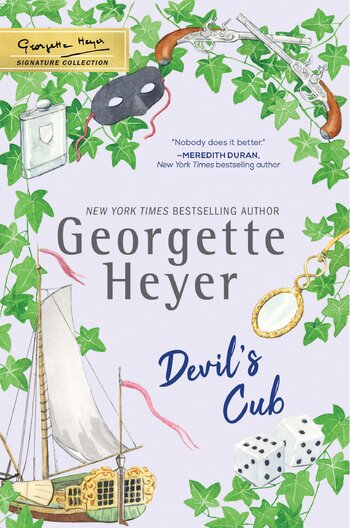 Devil's Cub is a 1932 historical romance novel by Georgette Heyer. It's the sequel to These Old Shades and was followed by a third book, An Infamous Army. It's one of Heyer's most popular novels and has never been out of print.

The Marquis of Vidal, nicknamed the Devil's Cub for his behaviour, is forced to leave the country after a duel. He decides to take his girlfriend Sophia with him as his mistress. Sophia's sister Mary won't let her sister be ruined, so she takes her place in the hope Vidal will let her go when he discovers the deception. He doesn't. Only when they get to France does he realise he's abducted her and damaged her reputation, so he offers to marry her. Mary refuses him and runs away. She meets a sympathetic old gentleman and takes him into her confidence, unaware he's Vidal's father and is looking for his son.