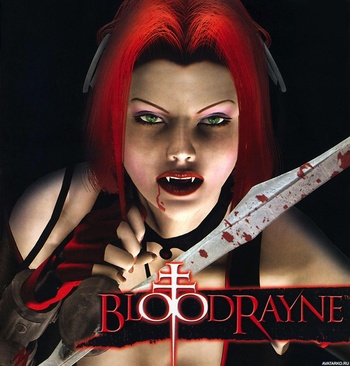 BloodRayne is an Action-Adventure Third-Person Shooter developed by Terminal Reality and published by Majesco in 2002. The game got a sequel, a 2D action-platformer spin-off, a series of mostly one-shot comic books, and a movie with two sequels which went Direct-to-DVD.

The protagonist Rayne is a half human-half vampire known as a dhampyr, who works under the Brimstone Society, an organization seeking to rid the world of vampires (besides Rayne since she also hates vampires). The first game, set in the 1930s in the years between the World War I and World War II, has Rayne fighting off monsters invading Louisiana and eventually hunting down Nazis looking for the skull of Beliar.

The sequel takes place decades after the first game ends, set around modern times where Rayne must take down an evil cult formed by the offspring of her vampire father Kagan that has created a substance that's blocking out the sun, allowing vampires to roam free.

The PC ports of the first two games in the series are also available through Steam and GOG.com; both games were also available OnLive until the service was shut down in 2015. BloodRayne: Betrayal is also available on Steam and GOG.com. Updated Re-releases of BloodRayne and BloodRayne 2 updated to run on modern systems without requiring fan mods were announced towards the end of 2020 by Ziggurat Interactive, the franchises' current owners, and was released on November 20, 2020; these versions are called the "Terminal Cut". A PlayStation 4, Xbox One, and Switch port of the Terminal Cut re-release of the first two games, dubbed "ReVamped", will be released in Fall 2021. A 4K remastered version of BloodRayne: Betrayal was announced during E3 2021, featuring full voice-acting with the series' original cast reprising their role for this remaster, and a new rebalanced difficulty mode while keeping brutal challenge of the original as an option; this version, dubbed "Fresh Bites", was released on September 9, 2021 for PlayStation 4, Xbox One, Switch, and PC through Steam and GOG.com.