Characters who appear in the BloodRayne video game series. 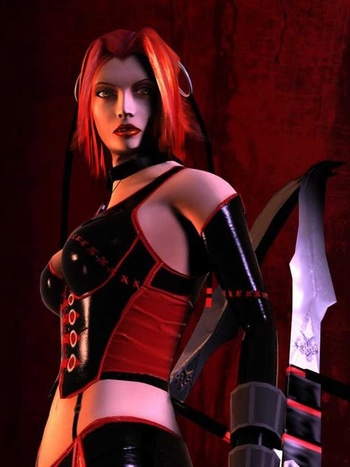 The eponymous protagonist. She is an American Dhampyr, born in 1915 from a human mother who was raped by a vampire father, who killed her entire family. Rayne spent her teenage years in search of revenge and during the 30s, she is approached by the Brimstone Society, an order dedicated to hunt vampires and supernatural threats that recruits her into their ranks. In the first game, she is sent into a mission to stop the Nazis from using ancient artifacts to bring an ancient demon upon the world. In the second game, she finally has a score to settle with her father Kagan and his vampire cult. 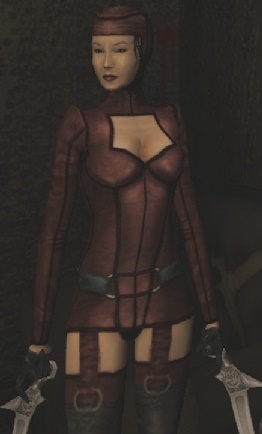 A dhampyr who served as Rayne's mentor/friend and a Brimstone Society operative. She seemingly dies during one mission in Louisiana, but she reappears years later as the second in command of the Gegengeist Gruppe (G.G.G.), the Nazi organization that deals with the supernatural.
Maraisreq
The Maraisreq are large, arachnid creatures that have over-run the city of Mortton, Louisiana. They are the main enemies fought by Rayne in the game's first act.
Daemites
Ancient parasites that were unearthed and experimented on by the Nazis during their excavation searching for Beliar's eye.
Simon and Sigmund Kreig, the Doppelgänger Twins
Senior Armed Forced Commanders in the G.G.G. They were two narcissistic twins that were conjoined at birth and separated, resulting in each of them having only one arm. They were encountered by Rayne while she was pursuing for Hedrox.
Advertisement:
Dr. Bathory Mengele
A nazi scientist known as the Butcheress that experimented on the Daemites in a secret base in Argentina.
Kommando
A mysterious infantry colonel who never speaks and wears a full suit of modern body armor and a face-concealing ballistic mask. He is the leader of the G.G.G. Commandoes, the game's most Elite Mooks.
Von Blut
A Nazi Thule High Priest at the Nazi's Argentina base.
D. Mauler
Infantry-Brigadier General of the Gegengeist Gruppe, he is a huge cybernetically enhanced Nazi and the end boss of Act 2.
Hedrox the Infinite

Hedrox an ancient and powerful vampire chieftain from New Guinea. He is also searching for the Heart of Belial to become the ultimate immortal, which puts him at odds with Rayne and Wulf.

Advertisement:
Jurgen Wulf
The supreme commander of the Gegengeist Gruppe and the Big Bad in the first game. He aims to sustain Hitler's power through the use of ancient artifacts.
Beliar
The previous ruler of Hell before he was dethroned by a fallen angel named Mephisto, his body was shattered and dispersed across the world. The G.G.G. is searching for them to grant the Third Reich supernatural power.