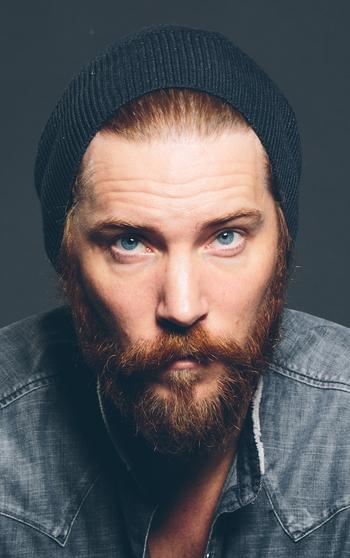 "You know, people often ask me, 'How does one get into acting in video games?', and the process is surprisingly simple. Step 1: save up your money, buy a decent microphone, and then wait for Nolan North and I to die."
— Troy Baker at The Game Awards 2015

Troy Edward Baker (born April 1, 1976 in Dallas, Texas) is a voice actor and musician from Texas whose forte seems to be playing assholes, be they heroic or villainous. On the other hand, though, he's also good at playing comedic characters, even though some of them just might end up being the former.

He has been doing voiceover work in California and with this change his forte has switched to playing Magnificent Bastards. If he voices a character like this, expect a character voiced by Johnny Yong Bosch to oppose him. Also seems to like playing a Fake Brit, generally either the Evil Brit or The Mean Britnote Kazkis Proxy and Schneizel have that Evil Brit thing going for them; November 11 and Excalibur are actually supposed to be British and have aspects of The Mean Brit.

He has become a major presence in the Batman franchise, having voiced Batman, two Robins, along with various villains. Most notably, he showed that he was a worthy successor to Mark Hamill's iconic portrayal of The Joker by doing a near-perfect replication of Hamill's voice in Batman: Arkham Origins, thus making him the only actor to date in any medium who has played both roles.

Troy married his wife Pam on October 13, 2012. Apparently, this is one of the main reasons why Matthew Mercer took over his role as Kanji in the second half of the Persona 4 anime. By the time he's back from honeymoon, he's gone to become so well-known and busy in the industry, Matthew Mercer would end up succeeding many of his roles in anime and Japanese games.

Troy is currently one of the most popular voice actors working out of Los Angeles today - you probably know him best for Booker DeWitt in BioShock Infinite, Joel in The Last of Us and its sequel, the default male voice in the Saints Row series from 3 onwards, the first voice of Kanji in Persona 4 (he left halfway through recording of the anime adaptation because of his marriage and honeymoon, and has since been replaced by Matthew Mercer), Hawkeye in Avengers Assemble and Snow in the Final Fantasy XIII trilogy.

While he might not be able to reprise his Japanese-based works, he'll still appear in Western works, examples include World of Warcraft (Gul'dan) and Mortal Kombat X (Shinnok), or if said 'Japanese' work is extremely high profile, such as Metal Gear Solid V: The Phantom Pain (Revolver Ocelot), and Death Stranding (he even got his name credited in Katakana: トロイ・ベイカー). However, sometimes he did have interest in reprising his old Japanese anime-style roles that he particularly likes, such as Yuri Lowell. When Tales of Vesperia: Definitive Edition was being localized, he wasn't even contacted to reprise much to his chagrin. While it is probable that his new fame might make the developers think that his lines were going to be super expensive and they wanted to cut cost, Troy made it clear he'd love to do it. This was further emphasized when in the following year, he confirmed he would be returning to voice Vincent in the remake of Catherine. Additionally, he has made a return to voicing anime in the form of the Netflix Baki the Grappler series where he plays the titular character.

On Thursdays, Baker co-hosts Retro Replay, a retro-gaming channel, with fellow voice actor Nolan North. In April 2019, Rooster Teeth partnered up with the show. Unfortunately in April 2020, after an apparent disagreement with the future direction of the channel, Baker left to form his own channel.

. Has no relation to fellow voice actor Dee Bradley Baker or to former doctors Tom Baker or Colin Baker.

Fucking roles, I will read the shit out of you!