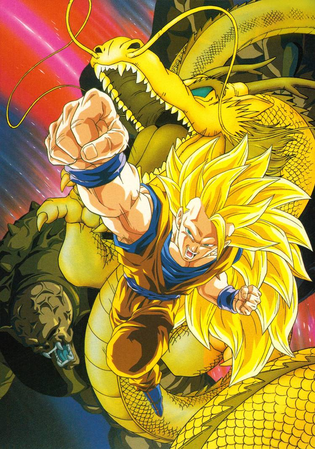 Dragon Ball Z: Wrath of the Dragon (known in Japan as Doragon Bōru Zetto: Ryū-Ken Bakuhatsu!! Gokū ga Yaraneba Dare ga Yaru; lit. "Dragon Ball Z: Dragon Fist Explosion!! If Gokū Can't Do It, Who Will?") is the 13th Dragon Ball Z movie. It was originally released in Japan on July 15, 1995 between episodes 270 and 271, with it premiering at the 1995 the Toei Anime Fair. It was dubbed in English by Funimation Entertainment and was released in the United States on September 12, 2006.
Advertisement:

Set after the events of the final battle with Majin Buu, the film focuses on the efforts of an evil magician, Hoi, to release the deadly monster Hirudegarn onto the Earth, forcing Goku and the Z Fighters to enlist the aid of a warrior named Tapion, who may be the only one capable of defeating the monster.

Alternative Title(s): Wrath Of The Dragon