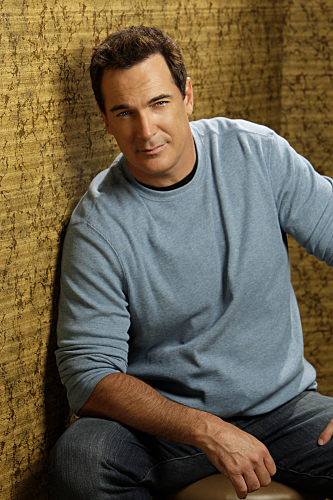 Patrick John Warburton (born November 14, 1964 in Paterson, New Jersey) with his manly voice, has become the go-to guy for characters with the Lantern Jaw of Justice and/or Dumb Muscle.

He is best known for the TV roles of David Puddy on Seinfeld, the title role of The Tick, the evil Johnny Johnson on NewsRadio, and anchorman Jeb Denton on Less Than Perfect. He also starred as Jeff Bingham on Rules of Engagement. As a voice actor, his uniquely deep voice has been lent to well-known roles including Ken in Bee Movie, Kronk in The Emperor's New Groove and its sequels, bodyguard Brock Samson on The Venture Bros., paraplegic cop Joe Swanson on Family Guy, Steve Barkin on Kim Possible, Lok in Tak and the Power of Juju, Sheriff Bronson Stone on Scooby-Doo! Mystery Incorporated and even Buzz Lightyear in Buzz Lightyear of Star Command.

In fact, his legendary manliness doesn't stop him from doing traditionally less-than-manly roles either, such as your personal Flight Attendant on Soarin' Over California at Disney California Adventure and its Epcot port, Soarin' (although he still manages to sneak in some comedy), and he's also provided the dialogue for the droid manning the thermal camera in the queue for the updated Star Tours. He's also done some advertising work, such as his notable M&M's commercials, or voicing the Carrier air conditioner.

Also, here's him deliciously telling you about cheeseburgers.

He also currently holds one of the top Big Star, Small Car lap times on the American Top Gear.