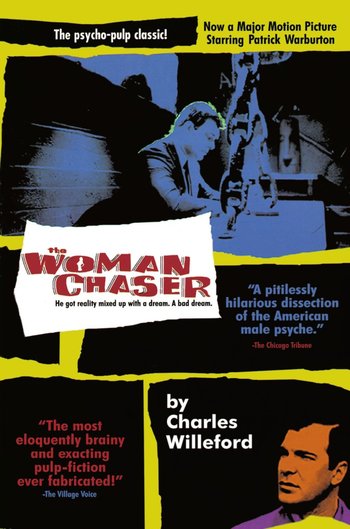 The Woman Chaser (1999) is a Neo Noir Black Comedy film in which Patrick Warburton plays Richard Hudson, a used car lot manager with severe oedipal issues who just moved to Hollywood. He moves into the servants quarters above his mother's garage, meets his stepfather, a down at the heals movie producer, and sleeps with his Jail Bait step sister to cure her of attachments to young men. In a fit of middle age malaise, he decides that life is meaningless without creativity, and since he has no creative talents he'll just have to go and make a movie. Enlisting his stepfather's connections in the movie business, and his money, from selling a collectible clown painting, he writes and directs a bleak independant art piece about a truck driver who runs down a small girl and her dog. The renegade trucker is finally stopped, and gunned down by the state police. He catches fire exiting the cab and stumbles, flaming, down the road in front of a speechless crowd, who violently prevent the assistance of the only onlooker who tries to put out the flames.

The movie, The Man Who Got Away, runs 27 minutes short (all movies are exactly 90 minutes long) and the studio refuses to release it as is, which drives Hudson into a rage. He knows that he won't be able to replace the money that he embezzled from his car lot to make it, and his stepfather won't be able to get his prized clown painting out of hock, so he burns the studio to the ground.