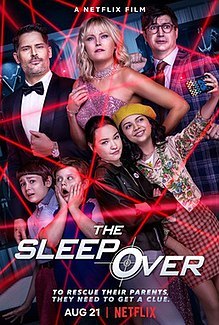 Margot Finch (Akerman) is a suburban housewife, married to pastry chef Ron (Marino), with a son, Kevin (Simkins) and daughter Clancy (Stanley). After a video taken of Kevin dancing in a restroom at school goes viral on YouTube, and Clancy and Margot get into a fight over Clancy not being able to go to a Senior party which will be attended by her crush, Travis, which results in her being grounded. Also, some shadowy figures note Margot's appearance in the video with a great degree of interest. Kevin prepares for an outdoor sleepover with his best friend, Lewis (Jaye), who has an incredibly over-protecting mother, while Clancy and her best friend Mim (Cicchino) plot to sneak out to the party.

When Lewis heads inside to use the bathroom, he witnesses Margot and Ron being abducted by some criminals who know Margot under a different name, Mathilde, but only after Margot snaps off her necklace and leaves a clue in the spilled sugar on the countertop. The children follow the clues, guided through their mother's mysterious past as an international jewel thief while Margot is forced to participate in one last heist with her former fiancé, Leo (Manganiello), who entered into Witness Protection the same time she did, after they turned in evidence regarding the boss of their theft and smuggling organization.