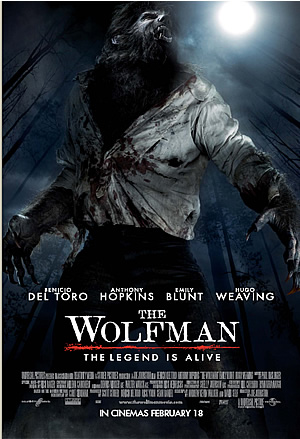 The remake of The Wolf Man (1941), released in 2010 and starring Benicio del Toro, Anthony Hopkins, Emily Blunt and Hugo Weaving. A Pragmatic Adaptation and more of an Homage to its predecessor, some of the most noticeable differences from the original are that it's now set in 1891 England as opposed to 1940s Wales, and is also much darker and more violent than its counterpart.
Advertisement:

Lawrence Talbot returns from America to his home estate to investigate the disappearance of his brother. Upon arriving home, he learns that his brother is dead, and the worst is yet to come...

The film adds new characters and expands upon old, and the werewolf designs are kept similar to the designs in the original and even use real makeup and costumes instead of relying on CGI.

Universal announced plans to make the Wolf Man into a direct-to-video film franchise. Their October 2012 film Werewolf: The Beast Among Us was originally planned to be the first installment, but was ultimately unrelated.

Has no connection to the Dark Universe, despite said cinematic universe also being produced by Universal, due to the universe planning on having its own take on the Wolf Man film.