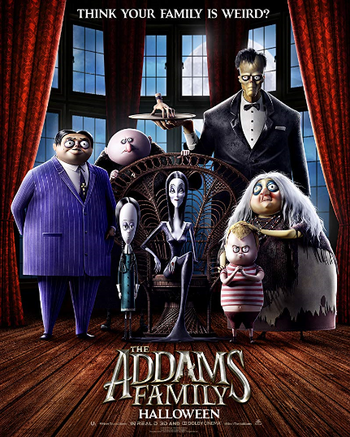 As always, weird is relative.
House: GEEEEEEET OOOOOOUUUUUUT....
Morticia: It's hideous.
Gomez: It's horrible.
Both: ... It's home.
Advertisement:

The Addams Family is an animated movie based on the franchise created by Charles Addams, directed by Conrad Vernon and Greg Tiernen of Sausage Party fame and animated by Cinesite, features vocal talent from the likes of Charlize Theron, Oscar Isaac, Nick Kroll, Finn Wolfhard, and Chloë Grace Moretz. The film was released on October 11th, 2019 by United Artists Releasing in America, and Universal Pictures internationally.

For thirteen years, the cheerfully macabre Addams family (Gomez and Morticia, their children Wednesday and Pugsley, their butler Lurch, and their disembodied hand Thing) have been happy to live far away from a world that despises them and everything they love (ghosts, monsters, playful attempts at murder and mutilation, that sort of thing). But when the perpetual fog around their house blows away one day, they discover a whole town has recently been built!

While the Addamses try to fit in with the new neighbors, reality TV star and home-repair guru Margeax Needler has plans for the bright and beautiful planned community of Assimilation, NJ... plans that don't involve the crazy Addams family, their haunted house, and their hordes of equally weird relatives who are coming into town for Pugsley's "Sabre Mazurka" on the same day she's filming the season finale of her show Margeaux's Design Intervention.

On October 15, 2019, following the film's successful opening weekend, a sequel, The Addams Family 2, was announced, with a planned release date of October 1, 2021 and both directors set to return. Due to the COVID-19 Pandemic, the sequel will release simultaneously in theaters and on digital retailers.

The 2019 adaptation of The Addams Family provides examples of:

For a film about the most cooky family around, it sure knows when to bring out emotion.

For a film about the most cooky family around, it sure knows when to bring out emotion.