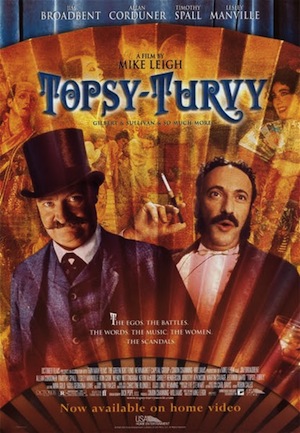 Topsy-Turvy is a 1999 film written and directed by Mike Leigh that focuses on the partnership of Gilbert and Sullivan when they reach a crossroads in their career.

After earning disappointing reviews for Princess Ida, Sir Arthur Sullivan (Allan Corduner) decides to unilaterally dissolve his partnership with William Gilbert (Jim Broadbent) creating comic operas for the Savoy Theatre. To get his mind off his troubles, Gilbert's wife, Kitty, drags him to the Japanese Village in Knightsbridge and he is inspired to write The Mikado. What follows is a comprehensive story of how the play was developed such as how it was written, how Sullivan prepared the music and the singing and how Gilbert dealt with the choreography, costuming and dealing with actors and their occasional moments of temperament.

Topsy-Turvy was nominated for four Academy Awards and won for Best Costume Design and Makeup.

Tropes Associated With This Work: