Film / Werewolf: The Beast Among Us 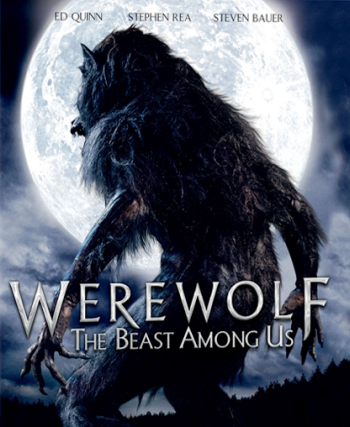 Werewolf: The Beast Among Us is a direct-to-video werewolf film released by Universal Pictures on October 2012. Originally planned as the first installment of a werewolf film franchise themed around The Wolfman, the film stars Nia Peeples, Guy Wilson, Ed Quinn, Ana Ularu, Steven Bauer, and Rachel Di Pillo.

The film focuses on a group of werewolf hunters in the 19th century, summoned to a village to investigate the attacks of a new type of werewolf; rather than only transform on a full moon, the werewolf transforms three nights in a row. A young medical student named Daniel becomes impressed by the werewolf hunters and seeks to become the protégé of their leader Charles. While hunting, they discover this particular werewolf is as intelligent as a human and not a mindless animal they usually are. On the romantic side of the story, Daniel is in a relationship with a rich girl named Eva, who doesn't want him to be hunting werewolves, and gets into a love triangle with a hunter named Stefan.

The film was shot in Romania, and some scenes were shot in Bethlen Castle with a budget of five million dollars.