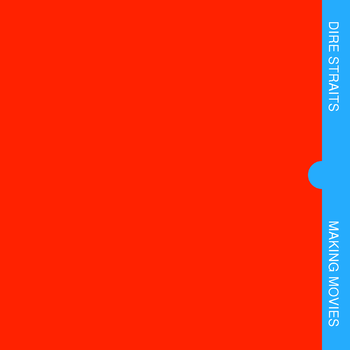 "I dreamed your dream for you, and now your dream is real."
Advertisement:

Making Movies, released in 1980, is the third studio album by British rock band Dire Straits. The album marks a significant turning point in the band's style, introducing a greater degree of musical complexity and experimentation compared to the low-key roots rock style of their self-titled debut and Communiqué, born out of frontman Mark Knopfler's desire to push what the band were capable of artists. While not everyone was on-board with the idea, with Knopfler's younger brother David leaving the group due to Creative Differences, the band was in enough agreement with Knopfler to shift focus towards longer, more intricately-arranged songs influenced by the emerging New Wave Music scene and the waning Progressive Rock scene without totally abandoning their Blues Rock core. In particular, the band sought out Jimmy Iovine for production duties after hearing his work on Patti Smith and Bruce Springsteen's duet "Because the Night".

The end result was a considerable commercial success, spending 252 consecutive weeks on the UK Albums chart, during which it peaked at No. 4, topping the charts in Italy and Norway, and peaking at No. 19 in the United States. The album was certified gold in France, Germany, the Netherlands, and Spain, platinum in the United States, New Zealand, and Finland, and double-platinum in the band's native UK. Lead single "Romeo and Juliet" additionally peaked at No. 8 on the UK Singles chart.

The music make her wanna be the troper, and the troper was whatever was the song, what it was: