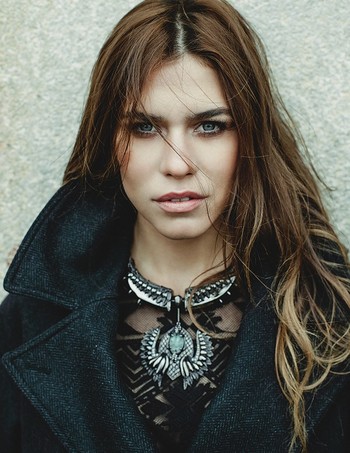 "I simply love theatre so much and I think it is essentially important to exercise your acting on stage."
"Did we really just… sympathise with the Wicked Witch of the West?"
—TVAtfterDark,

in an article discussing Ularu's role in Emerald City, showing how damn good she is.
Advertisement:

Ana Ularu (Born June 26th, 1985 in Bucharest, Romania) is a Romanian actress, model, and fancier of poetry who is well known in her home country, but is familiar to western audiences who have seen her as a unintentionally sympathetic assassin in Inferno, the wife of a future Manfred Bernardo in The Borgias, and, most recently, as one of the most beloved characters in Emerald City.

Born during a rough period in Romania's history, having to hide in her family's cellar during the Romanian Revolution when she was four years old, Ularu was surprisingly brought up well, to the point where she would be interested in acting at the age of six. This led to her first couple of roles in 1995, but had to take a break afterwards to have a good education. Ularu wouldn't act again until 2002, and a theatrical version of Lolita where she played Dolores Haze. After her interest in acting rose again, she was in a 2003 film called Maria, and it went moderately well in Romania, though she was still limited to Romania for years to come.

That was until Outbound was released in 2010. This is commonly seen as her Star-Making Role due to her role as Matilda, a sympathetic ex-criminal who is acted spectacularly. She was praised so much that she won a Shooting Stars Award for the role, handed to her by John Hurt himself. It increased further with one of her first foreign ventures, a One-Episode Wonder in the third season of The Borgias. Fans of the show said that the relationship between Cesare Borgia and Charlotte D'Albret is the best and most stable in show, which does not say much, but we'll let it slide. She would also meet Francois Arnaud in that show, who she has since referred to as "a brother in arms."

Her most notable film role outside of Romania is the assassin Vayentha in Inferno. The general consensus to that film is "It is boring, but Vayentha's good, though." That is not her most notable role, though. That would be Mistress West in Emerald City, one of the most beloved, albeit obscure, portrayals of The Wicked Witch of the West in modern times.

She is still a relatively small name in the acting world, especially compared to one-time co-star Jennifer Lawrence, but is praised as one of Europe's finest to make up for it.

Her accounts are here,