This Was His True Form 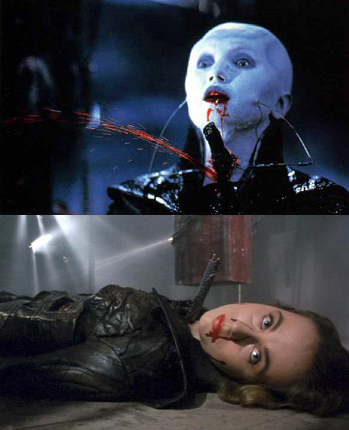 Counselor Tryhard: How do we tell which one is the real captain?
Lt Barf: It is a simple matter. The alien will revert to its natural state when dead. We simply kill them both.
— Sev Trek: Pus in Boots
Advertisement:

Shapeshifters in general tend to gravitate to their "base" or original forms as well when killed or sufficiently weakened, as do most victims of a Shapeshifter Swan Song, or monsters that were once human.

This started with werewolves; as monsters go, they tend to be... "different". One of their more peculiar traits is that they have No Ontological Inertia, because upon death they inevitably revert back to their "true" human form. Though similar to the Shapeshifter Swan Song (which usually ends in This Was His True Form), this is not a case of a Super-Power Meltdown, but an example of No Ontological Inertia regarding their "curse". Whatever innate power or curse is capable of using LEGO Genetics and Shapeshifter Baggage to add and remove a few hundred kilograms of fur, muscle, and teeth to or from an Innocent Bystander in a few moments, it apparently has no more lasting effect than a shot of espresso. Well, at least the espresso doesn't induce a killing frenzy — usually. This is usually used to show that the (sometimes) only way to cure a Werewolf is to kill them.

This is both potentially useful and frustrating for Heroes, since it removes evidence of the paranormal (which might be something that they want to cover up or prove) while adding the eentsy little complication of making them liable to face murder charges. No Self-Disposing Villains here.

When the form change stems from The Corruption, this may be the physical manifestation to parallel Dying as Yourself. This often results in Peaceful in Death, to show that the death really was freedom from the Curse and not a bad thing.

From a purely Fauxlosophical perspective, this would imply that all werewolves and shapeshifters are one specific human person rather than the sum of their multiple forms... which means that heroes killing either one are murdering potentially innocent people.

Sometimes, this is inverted, with someone who appeared to be human turning out to be something else entirely upon death.

See also The Mirror Shows Your True Self and Game Face. Compare Sleep-Mode Size for the anime super powered version, and Deathly Unmasking for a similar type of reveal at death. Contrast Clipped-Wing Angel. For the immortality/rejuvenation version, see No Immortal Inertia. Helps avoid Opening a Can of Clones. A character whose death unleashes an even more powerful persona is a One-Winged Angel.

Not to be confused with Death Means Humanity.

BEWARE: As this is a Death Trope, unmarked spoilers follow, both for deaths and possible secret identities. You Have Been Warned!

Alternative Title(s): This Was Her True Form, This Was Their True Form