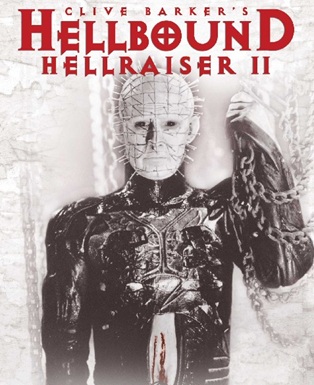 Hellbound: Hellraiser II (1988) is the second film in the Hellraiser series.

After surviving the events of the first film, Kirsty Cotton has been institutionalized in the Channard Institute. Neither the detectives assigned to the case nor the doctors at the institute believe her when she tells them about extra-dimensional beings and her undead uncle killing her father, and warns them that her evil stepmother Julia could still return. After hearing about this, the head of the hospital Dr. Channard retrieves the mattress that Julia died on, and repeats the ritual from the first film, allowing Julia to rise from the grave. Dr. Channard and Julia then work together to access the portal to the Cenobite dimension again, while Kirsty and a mute friend she made at the hospital try to stop them.