Captain's Log, Stardate 1513.1. Our position: orbiting planet M-113. Onboard the Enterprise: Mr. Spock, temporarily in command. On the planet: the ruins of an ancient and long-dead civilization. Ship's Surgeon McCoy and myself are now beaming down to the planet's surface. Our mission: routine medical examination... of archaeologist Robert Crater and his wife Nancy. Routine but for the fact that Nancy Crater is that one woman in Dr. McCoy's past...
— Captain James T. Kirk, delivering the opening lines of the first broadcast episode, first heard on September 8, 1966note Or September 6, 1966 in Canada. Yes, Canadian audiences — and those Americans who lived close enough to the Canadian border to receive signals from Canadian stations — were the very first to see Star Trek.
Advertisement: 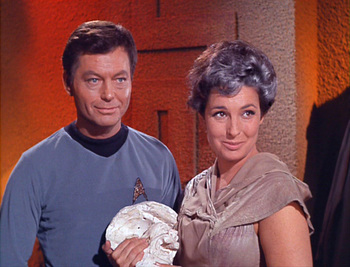 Bones and "Nancy."
Kirk, McCoy and a random crewman beam down to medically examine two scientists, living alone on an archaeology planet. One of these scientists (the lady, Nancy) was apparently previously romantically involved with McCoy. She shows an ability to disguise her appearance, seeming different to each person. She and the random crewman leave and he is killed off screen. Nancy says he ate some of the local vegetation and thus poisoned himself, but any reasonable viewer would doubt that.

McCoy and Spock determine that the unfortunate fellow didn’t die of poisoning and Kirk beams back down to investigate with McCoy and two more random crewmen. Both crewmen are killed, but Nancy disguises herself as one of the dead and beams aboard the ship. Here she proceeds to creep people out as she hunts for salt. It is determined Nancy isn’t on the planet and now Spock and Kirk beam down to question her husband.

Nancy takes McCoy’s form as an alarm sounds for the man she killed on board. Her husband willingly tells them that she’s actually a shapeshifting alien that killed his wife. She’s also the last of her kind – which Kirk finds unimpressive as she is killing his people. They report back to the ship where Nancy continues to impersonate McCoy. They plan to administer a truth serum on her husband so he will reveal where she is... at which point she kills her husband and attacks Spock. She goes to McCoy’s room and tries to convince him not to let them kill her. He is eventually forced to when she tries to kill the captain.

The Fan Nickname for this episode is "The One With The Salt Vampire".