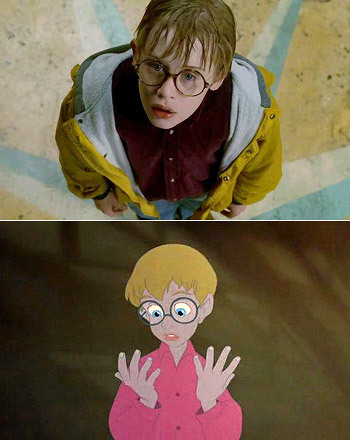 Technically, he's an illustration.
"I... I'm a cartoon!"
— Richard, The Pagemaster
Advertisement:

When somebody might end up in another world, artists and crew members might cut the budget, just by making them into a cartoon or the such. Whether it's through being taunted, going through a magic portal, or whatever else, but on the other side, those live action folks end up as cartoons.

Media that has this trope usually ends up as mostly a cartoon.

Not to be confused with Medium Blending or Art Shift.

After eating a crocodile tongue, James transforms into a stop-motion version of himself.

Alternative Title(s): Turning Into A Cartoon

After eating a crocodile tongue, James transforms into a stop-motion version of himself.