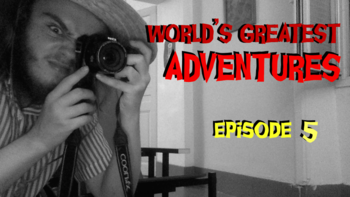 Rufus lad, you're not supposed to be the one holding the camera.
World's Greatest Adventures is a series of sketches created by Goblin Studios, available on YouTube

, and currently in its second season.
Advertisement:

The short skits see the delusional, megalomaniac "world's greatest explorer", Rufus Hooter Talltales. Invariably, Talltales begins with extravagant claims about his latest adventures or discoveries, only for buffoonish editing mistakes and his own stupidity to expose his senseless boasting for what it is.

Be warned, Rufus himself may be a fraud, but he inhabits a genuine World of Weirdness. Be prepared for aliens, wizardry, and living hats!