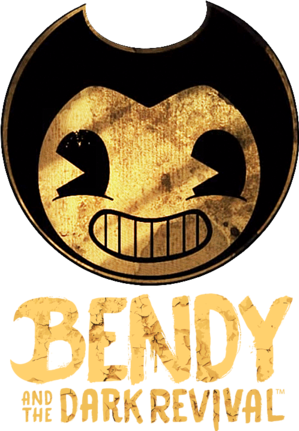 Return to the studio with new eyes
"Break the cycle this fall."
—Tagline
Advertisement:

Bendy and the Dark Revival is an Episodic Game created by the Kindly Beast. It's in the Bendy franchise and is stated to be neither a sequel nor a prequel nor an alternate universe to Bendy and the Ink Machine. It was announced

. Audio logs lead up to the name reveal trailer

were also announced to lead up to the release: an employee handbook for Joey Drew Studios; and a novel, Dreams Come to Life, which follows new characters Dot and Buddy.

was released June 24, 2019. It shows a new Player Character waking up to some unexpected changes and dealing with foes - both by fleeing and by fighting. Known characters include Bendy, a Searcher, and the Butcher Gang member known as the Piper/Charley. There is also a mysterious new character with a creepy voice, who is heavily implied to be an antagonist.

News on the game can be found on the official Bendy website, joeydrewstudios.com

Bendy and the Dark Revival contains examples of: