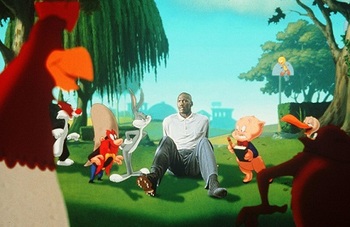 "Eh, you're not from around here, are ya, doc?"
Advertisement:

An alternate or parallel universe inhabited by cartoon characters (usually zany, Looney Tunes-style characters) and governed by Toon physics and the Rule of Funny. It exists alongside a more realistic universe, usually portrayed in live-action.

Though the trope is sometimes played straight, it's also a frequent target of deconstruction. The latter may highlight the impossibility of Toon physics, the violence in nominally kid-friendly cartoons, or the fantastic racism that might ensue if Toons really existed. Or any number of other things, really.

Subtrope of Alternate Universe and Roger Rabbit Effect. Compare with Toontown, where toon and man are separated by simple geography instead of different dimensions.