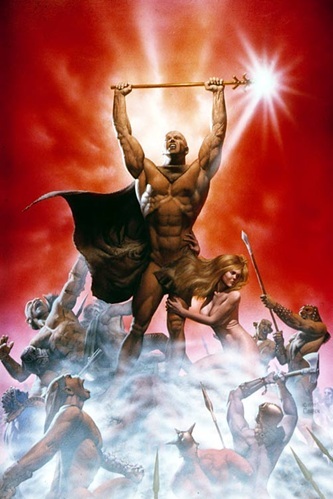 Den is a long running fantasy comic series by Richard Corben, that is essentially John Carter of Mars written with a 1970s sensibility.

where a white collar worker named Dan is whisked to a fantasy world of that name and became a naked muscleman having an adventure with a buxom naked sorceress.

The series continued as a comic strip in originally in Grim Wit #2 and was expanded upon in the French comic anthology, Metal Hurlant which was eventually translated in the American version, Heavy Metal. Here, Dan's nephew, David Ellis Norman, found plans for a device that transported himself to Neverwhere and changed into a studly naked muscleman himself on his own adventures.

The series has continued in various incarnations, some of which toned down the eroticism of the series only to have it flare up again until it ended with the "Denz" series in the pornographic Penthouse Comix which featured yet another relative coming to that world.

Along the way, the first story arc of Den appeared in a condensed Pragmatic Adaptation in the animated film Heavy Metal with John Candy voicing the title character.

Not to be confused with Neverwhere the novel by Neil Gaiman.

Den has the following tropes exhibited: