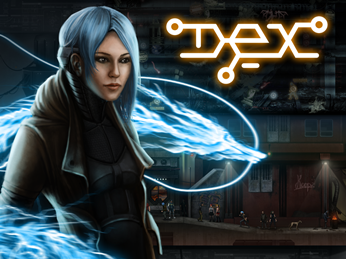 Dex is a Cyberpunk Metroidvania/Role-Playing Game hybrid, developed by Dreadlocks. It was funded on Kickstarter by the end of 2013, left Steam Early Access and entered general sale

The story follows Dex, an augmented woman in The City of Harbor Prime, who got on the wrong side of the Complex, a combined authority of the city's largest corporations. They send assassins after her, and she only escapes due to guidance from enigmatic Raycast, the leader of city's hackers seeking to wrest control back from the corporations.

The game follows a nonlinear approach in both gameplay and storytelling. It frequently providing multiple ways of resolving quests and allows the player to develop Dex in any way they see fit. Conversation skills, hacking/augmented reality, melee and ranged combat and even lock picking can all be upgraded for different gameplay experience.