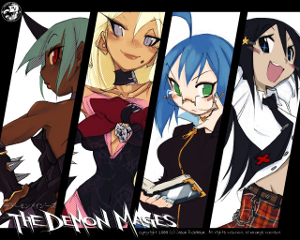 Our Demons Are Different. note -From left to right: Ziggy, Ari, Tess, and Tara-
Advertisement:

The year is 2423, After Dominion Calendar. It's been twenty years since the civil war that wrecked the Republic of Koltenia. On a moonlit night, a bounty huntress named Ziggy gets roped into one last job involving the acquisition of an important object. Meanwhile, the actress Ari Laharis makes her stage debut in a presentation meant to celebrate the anniversary of Koltenia's independence—and finds herself in the middle of Ziggy's work...

So begins The Demon Mages, an incomplete independent comic drawn by Jason Robinson. An (incomplete) two-part miniseries, it tells the story of a very long night in the lives of four women (the orphan Tara finds herself involved in Ziggy and Ari's mess, and soon-after, the succubus Tess is roped in as well), the story takes place in a fascinating world... that sadly isn't very well developed.

Currently on hiatus, as Robinson's freelance work has taken priority.