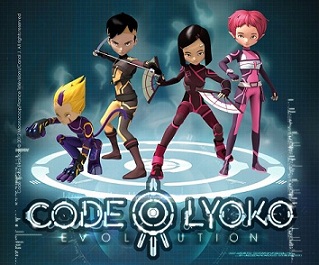 Code Lyoko: Evolution (Code Lyoko Évolution) is the sequel series to Code Lyoko. Contrary to the original show, it sports a major difference: instead of the mix of 2D and 3D animation styles that Code Lyoko was famous for, the 3D has been revamped, and the 2D has been replaced with live-action. It ran with one season of 26 episodes. A preview screening took place in Paris on December 5th, 2012, the first episode was streamed on France 4's website on December 19th, 2012, and the first three episodes of the series premiered on France 4 on January 5th, 2013. A US premiere was on February 2013 on MoonScoop's Kabillion channel.

The series starts around six months after the end of Code Lyoko. As the former Lyoko Warriors are starting a new year, two successive phenomenons resembling XANA's attacks happen. Though they initially dismiss it as coincidence, Aelita convinces them to go back to the Factory and reactivates the Supercomputer just to make sure. It quickly turns out that XANA somehow survived by infecting the Lyoko Warriors with his source code right before the destruction of his Replikas, effectively turning them into his Soul Jars. To restore himself, he must drain these codes from them. Unable to stop him by shutting down the Supercomputer, the Lyoko Warriors decide to fight him again.

The live-action components were filmed in the Angoulême region of France in July-August 2012, with Kadic scenes filmed at the Lycée Guez de Balzac

The show ended on a Cliffhanger, with the possibility of new seasons remaining open, but ultimately, it proved expensive enough to be a Creator Killer for MoonScoop, which went bankrupt no more than a year after the last episode aired in 2013, with the sets all being sold off, leaving the series a one-off.

The official Code Lyoko English Youtube channel has uploaded the entirety of the show, free to watch. It can be viewed here

Note: Because this is a sequel to an existing series, only tropes specific to the new series should go here.