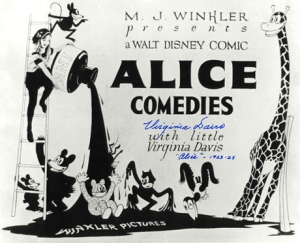 It all began with a girl. And a cat.
Advertisement:

The Alice Comedies was a series of short cartoons made by Walt Disney and Ub Iwerks during The Silent Age of Animation. It was the successor to their failed Newman Laugh-O-Grams series, and a precursor to their Oswald the Lucky Rabbit series. The cartoons feature Alice, a live action girl, interacting with an animated world. Near the beginning, the shorts would start with something happening to Alice in the real world after which she falls asleep or gets knocked out. She then enters an animated dream world where she interacts with Julius the Cat and a host of other Funny Animals. Hi-jinx Ensue. Later installments dropped the real world Framing Device and took place entirely in the cartoon world.

The cartoons themselves had little in the way of plot or continuity, and were mainly just for showing off the animation.

Compare Max and Dave Fleischer's Out of the Inkwell, another live action/animation blending cartoon that was the inspiration for this series.

Little Alice visits the studio where they make cartoons.

Little Alice visits the studio where they make cartoons.