Western Animation / Out of the Inkwell 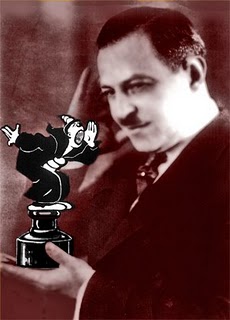 Out of the Inkwell was a major series of animated cartoons from The Silent Age of Animation and the earliest days of The Golden Age of Animation, produced by Max Fleischer from 1918 to 1929. The series was the result of three short experimental films that Max Fleischer independently produced in the period of 1914-1916 to demonstrate his invention, the Rotoscope, which was a device consisting of a film projector and easel used as an aid for achieving realistic movement for animated cartoons.

The series was popular enough to get its own Sunday comic feature, syndicated by Hearst, in 1934, but it only lasted four weeks.

Out of the Inkwell shorts with TV Tropes pages: